The story of my maternal great great grandfather’s sister Elizabeth Talmer Roberts Shepherd continues….   (The beginning of Lizzie’s story can be located here.)

Now at a time when things are going along quite well for the new community and life has become a bit easier for most of them, it is sad to report that things were not going that well for the Shepherd family.  As Lizzie’s husband Rollins Don Carlos Shepherd advanced into his seventies he became more and more irritable and unpredictable in his behavior.  One evening Florence and Burton Prettyman stopped by the Shepherd Ranch and were caught there in a heavy rainstorm.  They moved a straw tick from their wagon and prepared to stay over night.  Sometime during the night, father got up and was going to set the house afire.  When Burton took hold of him and spoke to him he did not even remember that Burton had been there earlier.  Burton put him back to bed and talked quietly to him for awhile.  Often after this, the children would carry their straw ticks out and sleep in the haystack during the summer weather.

About this time Carl had a very bad attack of boils.  He had three or four large boils on the back of his neck.  They were very sore and made him hurt all over.  He had stopped work and come into the kitchen and sat down in a chair feeling very ill.  In the meantime the calves got out of their pen and in with the cows and were nursing all the days supply of milk.  When his father saw this he became enraged and rushed into the house to get Carl.  He was carrying his irrigation shovel.  Carl saw him raise the shovel, mother yelled, and he jumped out of the chair just as father brought the shovel down with such force that he split the chair in half.

Another day father came into the house from the fields and went to the water bucket for a drink, but the bucket was empty.  Lizzie was sitting at the sewing machine and did not get up.  Rollins Don Carlos took the bucket and went to the irrigation ditch for water.  When he came back he sat the bucket down and took a drink.  Then he took the heavy water dipper and began to beat Lizzie over the head with it.  Her cries brought Carl on the run from the barn with the pitchfork.  He told his father to quit or he would use the fork on him.  His father knew that Carl meant it.  Carl and father got along well for the most part.  It was Carl who stayed and cared for him longer than anyone.

Late in the summer of that year Lizzie’s son Laffe and a man by the name of Will Hawkins went over near the Yellowstone area and worked on a cattle ranch for that fall and winter.  Laffe got very homesick and wrote a poem, which he mailed home, to his mother.

I wish I had a clean shirt

I wish I had some shoes

I wish my little grey horse was fat

and I didn’t have the blues.

I would go back home again

and there I would remain,

I never would punch cows

for the old L.C. Ranch again.

With two of the older boys away and only Carl to help him with the ranch work, Rollins Don Carlos became very discouraged in the fall of 1903.  He arranged to mortgage the ranch for a thousand dollars and decided to make a trip back to Beaver, Utah where his brother was living.  Before he left he went to a lawyer in Burlington and had a legal paper drawn up conveying all the personal property, farm equipment and livestock to Lizzie.  Their daughter Valie also believed that he had a formal bill of divorcement drawn up at this time.  Lizzie sewed the money into his underclothing and the boys took him by wagon to Basin, where he took the train to begin his journey to Beaver.  Rollins Don Carlos was happy to see his brother again and remained with him for several months.  He was still in Beaver when his brother Marcus Lafayette Shepherd had a heart attack and fell from a load of logs on February 5, 1904 at the age of nearly 80 years.  From a book on Beaver history, J. F. Tolton said of him “Marcus L. Shepherd: Philanthropist, Church Man – One who loved God adn served his fellowman.”

When their father returned to the ranch in the early spring of 1904, he brought a velvet bonnet for each of the little girls and a China doll.  Edna got a brown bonnet, Addie a red one and Valie a blue one.  Not long after though Edna’s had her taken by some older boys to tease her and they dropped it into the outdoor toilet.  The China dolls that Edna and Addie had, each had back hair that was painted on.  Soon Claude ran one of these through the cog wheel on the wringer of the washtubs.  Claude was always full of mischief.  he loved to get the key to the big eight day clock that hung on the wall.  he would change the alarm and set it to go off in the middle of the night.  Mother tried to keep the key hidden and often scolded him for his pranks, but he did not change.  The doll that Valie had was a smaller doll with real blonde hair.  She cherished this doll until she was past twenty year sold.  Then one day while she was cleaning out her trunk and had laid it on the bed, Claude came into the room and up to his usual mischief picked up a marble and flicked it at the doll.  The marble struck the doll’s head, causing it to break all to pieces.  Valie felt very bad about it for she had kept it for so many years and it was the only keepsake she had from her father.

Sometime early in the year of 1904 Carl Shepherd, age 19, married Marry Anna Montana Abercrombria (Caldwell) who was born December 18, 1876.  She was 28 years old. Annie had come to the area with her parents, but she was living in a small house on the place just below the Shepherd placed.  Annie had been married to James Caldwell and had four children.  They were Melissa Caldwell (who had died prior to their marriage), Brazilla Caldwell, who was about 8 year sold, James Caldwell, who was about 6.5 years old and Ira Caldwell, who was still a baby.  Carl left the ranch and moved to a small house with Anie and her family sometime in the early part of 1904.

Rollins Don Carlos Shepherd was now past 74 years old and he was tired in body and spirt.  He had been saddened by the passing of his brother and could feel that his own years were limited.  He did not have a great deal to show for all his years of hard labor.  He had mortgaged the ranch and signed away the livestock and all the farm equipment to his wife.  The two boys, Earnest and Carl, who had worked so hard with him on the ranch for ten years had left to establish homes for themselves.

**It is believed that if the Shepherd families had combined their resources and gone ahead to homestead and to acquire more land in this fertile area, that their lives might have been very different.

However it was a time of change for Lizzie too.  She was just past 43 years old and still a strong and vigorous woman.  To be continued……

When they reached New York on April 23, 1883 Lizzie’s son was still very ill and she began to fear that they would be quarantined by the immigration and custom service.  She had him wrapped up in a blanket and as the line moved slowly forward they didn’t stop her and instead barked at her “Pass on lady, pass on.” 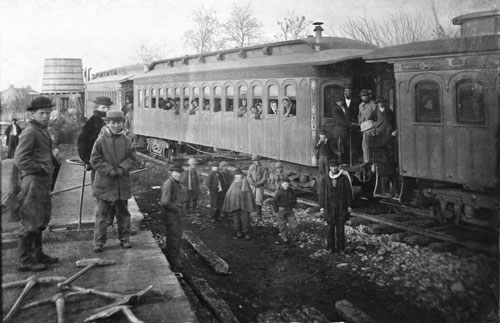 Lizzie, her two children Florence (age 4) and Benjamin Earnest (age 2), sister Lucy and brother-in-law Fred Fields, after arriving in New York, continued their journey west via train.  They rode in boxcars on rough wooden benches with other immigrants to the Salt Lake Valley.  Later they took another train to Milford where they were met by members of the Roberts family from Beaver, Utah.  A small house was found for Lizzie and her children and it was here, on October 22, 1883 that she gave birth to another son that she name John Wiggett after his father. Lizzie delivered the child herself and the child lived only a few days.

During the fall and winter Lizzie received several letters from her husband John Wiggett, who had remained in England.  She kept the letters in a coffee can for many years.  Copies of the letters were preserved by her family.  Below is the first page of a letter John Wiggett wrote to Lizzie in October 1883.  It was four pages long.  This is followed by a typed version a family member prepared.

It soon became necessary for Lizzie to find work to support herself and her children.  She went to work as a housekeeper for a man named Rollins Don Carlos Shepherd who lived in Beaver, Utah.  He had been born in Cleveland, Ohio on December 8, 1832.  He was thirty years older than Lizzie and already twice a widower, having been married to Sarah Smithson and then to Sarah Harris.  About 1870 he lived in San Bernardino, California where he acquired property which was lost through lawsuits.  He then moved to St. George, Utah where it is believed he worked on the building of the temple.

Lizzie and Don Carlos were married at Minersville, Utah on February 16, 1884.  He was 53 years old and she was 23 years old.  On January 1, 1885 their son Rollins Don Carlos II was born in Beaver, Utah.  Although it is believed that Rollins Don Carlos Sr. had children from a previous marriage, it is thought this was his first son.  On December 16, 1886 their second son was born. He was named Marcus de Lafayette after his uncle, the brother of Rollins Don Carlos.  His brother Marcus was also a resident of Beaver, Utah during this time and had established a store and mill.  From 1869 Marcus served many years as Bishop of the Beaver First Ward.  Marcus was six years older than Rollins Don Carlos and they were very close.

During these years the church was still colonizing in many areas.  Families were often asked to volunteer to go into new areas and open them up for future expansion.  Early in the spring of 1888 Rollins Don Carlos Shepherd, Lizzie and their children moved to Vernal in the Uintah Basin of Eastern Utah.  The family spent about five years farming in this area and accumulated quite a few cattle.  During this time three more children were born to Lizzie and Rollins Don Carlos, Claude Ashley Shepherd born June 18, 1888, next Electra Shepherd born November 23, 1889, and then Edna Shepherd born December 9, 1892.  They established a good home and had cattle and horses.