My most recent article in the Cosmic Cowgirls Magazine is called Am I Pretty?
One of the quotes I ask readers to contemplate is from
Women Who Run with the Wolves by Clarissa Pinkola Estés, PhD:
“Destroying a woman’s instinctive affiliation with her natural body
cheats her of confidence. It causes her to perseverate
about whether she is a good person or not, and bases her
self-worth on how she looks instead of who she is.
It keeps her preoccupied , colors everything she does, plans, and anticipates.
It is unthinkable in the instinctive world
that a woman should live preoccupied by appearance this way.”
Come read the complete article over at the
Cosmic Cowgirl’s Magazine by visiting this web link:
http://cosmiccowgirlsmagazine.wordpress.com/2012/04/05/am-i-pretty/

“Harsh judgments about body acceptability create a nation of hunched-over tall girls,
short women on stilts, women of size dressed as though in mourning,
very slender women trying to puff themselves out like adders, and various other women in hiding.
Destroying a woman’s instinctive affiliation with her natural body cheats her of confidence.
It causes her to perseverate about whether she is a good person or not, and bases her self-worth
on how she looks instead of who she is.  It pressures her to use up her energy worrying
about how much food she consumes or the readings on the scale and tape measure.
It keeps her preoccupied , colors everything she does, plans, and anticipates.
It is unthinkable in the instinctive world that a woman should live preoccupied by appearance this way.”

~ From Women Who Run with the Wolves by Clarissa Pinkola Estes, PhD
When I read the book The Diary of Anne Frank as a 13 year old girl, it didn’t matter that I wasn’t Jewish and living in Nazi occupied Amsterdam in the Netherlands, I could still relate to that girl of a different era and her true story captivated me.  When I read the memoir Warriors Don’t Cry by Melba Patillo Beales, which told her story of being one of the nine black students who participated in the integration of Little Rock Central High School in 1957, for a time I too was immersed in the unbelievable and horrible racism that those students experienced.

So when I watched a trailer for an upcoming documentary called Dark Girls my heart was breaking for the women who shared their painful stories.  The tears flowed when a young child was asked to identify from a cartoon drawing of children the smart, stupid, pretty and ugly child and all of her answers were based on the color of the child.  I personally wanted to take that young girl in my arms and tell her that she is amazing, smart, beautiful and also so much more than just her physical being.

Here is the trailer for the film Dark Girls:
(http://vimeo.com/24155797)
Dark Girls: Preview from Bradinn French on Vimeo.
I have never understood racism or how anyone can treat another person as if they are less than because of their appearance, their ethnicity or their nationality.  In college one of my majors was history and my areas of concentration were African American History, Latin American History and Native American History.  Some of the research and reading I did for my classes and for papers I wrote was sad and disturbing.  There were articles and books written years ago, as if they were from real research and scientific studies, that set out to prove the superiority of the white race.  Someone walking by in the library would have heard me gagging.
One would think things like this would be archaic and yet just this year a reputable publication called Psychology Today used very poor taste, judgment and what all to give the time of day to a “researcher” who wrote an article entitled “Why Are Black Women Less Physically Attractive Than Other Women.”   Psychology Today removed the on-line link after the thousands of letters and comments poured in, but that they allowed this schmuck to have a forum to share this garbage in the first place is disturbing.
A writer named Denene Miller, creator of a blog called My Brown Baby saw the aforementioned article and had a few things to say in response in her own article called The Attack Against Black Girl Beauty.  Here is an excerpt as well as a link if you would like to read the entire piece. http://mybrownbaby.com/2011/05/the-attack-against-black-girl-beauty/

“And like any mother who tucks her new baby girl into her first lovely dress, I looked at Mari’s face and stared into her eyes and pulled her chubby little cheeks to mine and marveled at how striking she was.
And every morning, still, I do the same with both my girls. Some days, they’ll just be talking to me about nothing in particular and I’ll look up and catch a glimpse of Lila’s big ol’ almond eyes and that Hershey’s Special Dark Chocolate-colored skin of hers, or Mari’s perfect apple face and that ancient Egyptian nose, looking like it was carved to match the Sphinx, and it literally takes my breath away.
They are, simply, beautiful girls.
I tell them this often.
Not just because I believe it to the core, but because the world conspires to tell my babies different—to ingrain in their brains that something is wrong with their kinky hair and their juicy lips and their dark skin and their piercing brown eyes and their bubble butts and thick thighs and black girl goodness. I promise you, it feels like I’m guarding them from a tsunami of “you’re ugly” pronouncements; magazines and TV shows and popular radio and movies and all of the rest of pop culture insist on squeezing all of us women into a ridiculously Eurocentric, blonde-haired, light-eyed standard of beauty, but good God, unless you’re parenting a little black girl, you have absolutely no earthly idea how exhausting it is to be media whipped for not being a white girl…
But I am trying desperately to save my little girls. From the magazine editors who refuse to put brown-skinned girls on their covers and in their pages. From the TV show producers who shovel shows on Disney and Nickelodeon without a care in the world that my brown babies go, literally, for hours without seeing one character who looks like them. From the music and movie industries, which, even when brown girls are involved, puts greater stock in light skin and long, flowing weaves. From the book industry, which seems like it’ll suck blood from a stone before it backs books featuring black children like it does books featuring white ones.
And I’m trying to save my girls from celebrities and singers and pro ballers and anyone else who has a microphone and especially researchers who will, by any means necessary, tell them that their brown skin and thick lips and pudgy noses and kinky hair make them ugly and manly and unattractive and undesireable.
But you know what? That’s a whole lot of fighting. A whole lot of guarding. A whole lot of explaining. A whole lot of counterbalancing.
And on days like these, I get tired, y’all.
And wish that we—me and my beautiful black girls—could just… be.”
It is hearing such things that brings me full circle back to the quote Women Who Run with the Wolves by Clarissa Pinkola Estes, PhD
“Destroying a woman’s instinctive affiliation with her natural body cheats her of confidence.  It causes her to perseverate about whether she is a good person or not, and bases her self-worth on how she looks instead of who she is.  It keeps her preoccupied , colors everything she does, plans, and anticipates.  It is unthinkable in the instinctive world that a woman should live preoccupied by appearance this way.”
What do you think we can do to change such harsh judgments about people’s physical appearances?  Do you even think it is possible?
What was your response to the Dark Girls trailer?
Do you think that women are overly concerned with appearances?
If yes, do you think that these preoccupations take away from time that could be better spent creating, inventing, painting, writing, dancing, adventuring, living and loving? 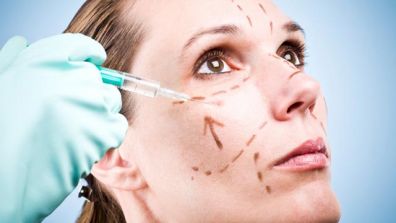 “La Loba, the old one, The One Who Knows, is within us.  She thrives in the deepest soul-psyche of women, the ancient and vital Wild Woman.  The La Loba story describes her home as that place in time where the spirit of women and the spirit of wolf meet–the place where her mind and her instincts mingle, where a woman’s deep life funds her mundane life.  It is the point where the I and the Thou kiss, the place where women run with the wolves.

This old woman stands between the worlds of rationality and mythos.  She is the knuckle bone on which these two worlds turn.  This land between the worlds is that inexplicable place we all recognize once we experience it, but its nuances slip away and shape-change if one tries to pin them down, except when we use poetry, music, dance… or story.”
Excerpt from Women Who Run With the Wolves by Clarissa Pinkola Estes, PhD

Just in case you are not aware there is a most wonderful reading group called Wild Women Story Gathering.  Beginning in January of this year the group began reading Women Who Run With the Wolves.  Cosmic Cowgirls Jenafer Joy and Steph Cowling are our wild women leaders. If have not read this amazing book yet, or even if you have, consider joining us over at the reading site: (It is free for Cosmic Cowgirls) http://workingstories.ning.com/
We all have the wild woman within us.  Sometimes the challenge lies in recognizing her or allowing her freedom of expression.
How do you keep in touch with your wild woman?
How does she like to express herself?
If she could do anything she wanted what would it be?
As you consider your responses check out this gorgeous print and an amazing piece of writing by Shiloh McCloud all about Wild Women. 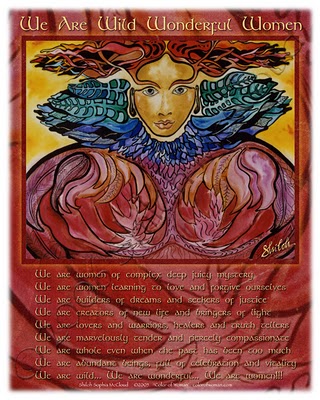 We Are Wild Wonderful Women

We are women of complex deep juicy mystery
We are women learning to love and forgive ourselves
We are builders of dreams and seekers of justice
We are creators of new life and bringers of light
We are lovers and warriors, healers and truth tellers
We are marvelously tender and fiercely compassionate
We are whole even when the past has been too much
We are abundant beings, full of celebration and vitality