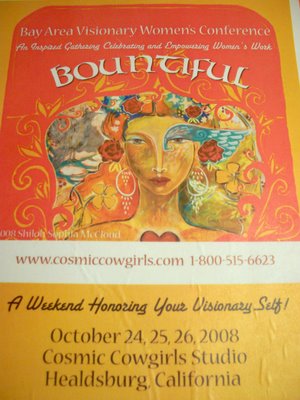 In October of 2008 I attended my first Cosmic Cowgirl event.  It was the Bountiful Conference and really I had no idea what attending that one conference would lead to and how it would alter my future.   Now it wasn’t like everything fell into perfect place and I immediately began to follow my true purpose.  There were some bumps along the way, in fact on my 40th birthday in April of 2009 some news made me feel that my world was crashing down around me and there were some very tough days from that point forward.  Yet, even through that year, which was one of my own dark nights of the soul, Cosmic Cowgirls was one of the things that sustained me.  It was a combination of both the amazing women I had met, but also just knowing that something like Cosmic Cowgirls could even exist.  I was sustained by knowing that there were women from around the country and even overseas, who were connecting and creating a circling tribe full of artistic, creative, passionate, loving, inspiring, kick-up-their-boots hootin’ and hollerin’ kick-ass wild women. 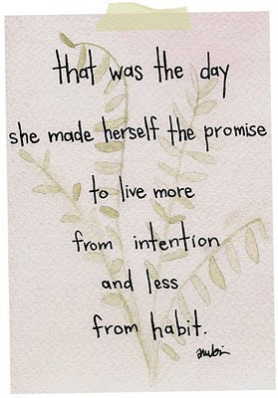 I have learned so much from the classes I have taken with Cosmic Cowgirls.  One of the biggies is about the power of intention.  In 2010 as things in my life were healing and as I delved back into participating more with Cosmic Cowgirls I attended the member conference and then I took the class called A Year of Great Promise.  Meeting in person with some sister Cosmic Cowgirls was good for the soul and during our time together we contemplated what we wanted to declare for that year.  What I ended up declaring for myself was that 2010 was the Year of Passionately Embracing My Soul’s Creative Calling.  We also shared something we were going to release and my personal declaration was “I release perfection and embrace myself with Grace and Love.”  We created collages and special containers to hold our dreams and goals for ourselves for the year.   The course called A Year of Great Promise was really powerful and by the time the course ended I had about a 15 page document that detailed my vision for myself and the life I want to lead.

Somehow in the beginning of 2011 I did not make a statement for the year and now I see that I was pressing forward with continuing as I did in 2010 to embrace my creative calling.  I joined the Cosmic Cowgirls 6 month long Leading A Legendary Life course in 2011, which was a big dream for me.  Again the work completed led me to feel more confident in my artistic abilities and to gain more clarity on the personal legend I am creating.

A week ago when I pulled out the letter I had written to myself back in 2010 I knew immediately what my 2012 declaration would be and without hesitation I said to myself 2012 is the year of completion and new beginnings.  I love the clarity that I have this year, but don’t be disheartened if that is not the case for you.  It can actually be fun and interesting to still be in the place of figuring it out and exploring what you are wishing for to happen next.
As I write this Mojo Monday post I am realizing that I have not yet considered if there is something I wish to release and embrace this year.  The first thing that comes to mind is the fretting I have done over friendship these past few years.  I experienced some shifts in friendships that put me through a great deal of distress for a few years.  I think it has taken this much time to get to this place and makes it possible for me to say that I release those former connections with great love and I embrace knowing deep in my soul that though I am imperfect and may make mistakes I am a loving and good hearted friend who cares and loves deeply and never intentionally hurts others.

Before I bid 2011 goodbye I will write myself a letter and I will create a new piece of art that will represent my intentions for the new year.

Consider what your heart and soul wishes for you in the new year.
Join me in making your own declaration and then make the time to go through your own creative process of expressing that declaration.

Maybe you want to create a collage or paint the vision you hold for yourself.

Another possibility is to write a poem or take some photographs that capture your intentions.

Also is there something you wish to release and in turn embrace?
I hope you’ll share your new year declaration and your plans for releasing and embracing.

If you need time to think it through, explore it this week and come back and share what arises for you.

One other great lesson I have learned is that there is great power in speaking aloud one’s intentions.  One can gain strength from sharing such things within a community or a circle.

I offer that this is a great place to be witnessed and heard.

With Love and In Support of Your Intentions,
Michelle (aka Red and Ida Shine!)


Some other things to explore as you ponder your dreams and goals:

Oprah’s January issue that is just about to hit the stands has a great article by Martha Beck called You Can See Clearly Now.  She takes readers through a clarifying process of really determining what one wants.  She breaks it down into the four P’s: Pushback, Possibilities, Preferences and Pinpointing. In the simplest terms Pushback involves figuring out what you don’t want. Martha describes it as the “bitch and moan” portion that allows you to figure out that you no longer what to do such and such or no longer want to be with so and so.  The next step of Possibilities involves beginning to use your imagination to see past what is no longer working for you.  She describes Preferences as being the place where you start to notice which possibilities leave you feeling intrigued, curious, and a bit lighter.  When you get to the Pinpoint part this is when you are finally reaching clarity on exactly what you want.  You are envisioning it and can then set your intentions on achieving it. 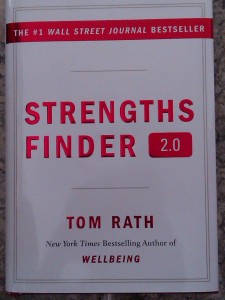 There is a great book called Strengths Finder 2.0 by Tom Rath.  I was given this book a several years ago by the fost-adoption agency I have worked for for nearly 8 years now.  When you buy the book new there is a sealed envelope in the back that when opened provides you with a key to enter into an on-line personality test.  I was really blown away by the accuracy of the results.  The exam identifies your strengths and can be a tool for some people to use in seeking their path in life.

Lastly for fun you can always check your numerology and see what personal year you happen to be leaving and which one you are about to gain entry to in 2012.  Supposedly we go through 9 year life cycles.  2011 was a 9 year for me which means I am at the end of a cycle.  Entering into a 1 year in 2012 means I am embarking on a new cycle.  A common description of a 9 year is that this is your year to finish up all unfinished business, to clean house and make room for new things.  In short the 1 year is described as follows: You are starting a new nine year Epicycle. Everything you do now will affect your future. Do not hold back the inner force of creation. Be direct, daring, bold. You will have more confidence and determination this year, particularly in comparison with last year, which was a time of letting go. This year represents a time of birth. It’s a time to take charge and to apply yourself to your dream.