Some years ago at a work training about self defense for women, the instructor asked the group what they would do if they were attacked.  A couple of the women in the room, shook their heads and audibly said things like “I don’t think so” and “He’d get a face full of my fists,” but more comments were about screaming for help.  The instructor listened to these comments and then said “Now what if you had your children with you and this person was going to attack you and your children?”  My, oh my, the room erupted in a cacophony of women stating very firmly what they would do to protect their children. When they quieted down, the instructor then asked “Why would you scream for help and not take any actions to defend yourself if it was just you, and yet fight to the death to defend your children?”


Now of course it is hard to really know how we will react in such an extreme, adrenaline rush of a situation where we actually believe our life is being threatened, but it was a fascinating question.  Why would some women turn into a big mean mama bear to protect their children, yet not do the same to protect themselves?


Personally, I am a peace loving person.  I don’t support war.  I cannot watch flagrantly gorey and violent movies.  Just watching pretend situations where people are cruel, hurtful or inflicting pain on other people disturbs me.  I also don’t think that revenge or retribution is productive, but rather only leads to more human misery.  When I read stories of people who rise above and forgive others I am deeply moved.  (You can find some amazing stories of forgiveness on the web site called The Forgiveness Project) However, if you give me a scenario where someone is intending to inflict violence upon a loved one, I know without a doubt, that I would turn into a fierce fighting warrior.  I have had a few experiences in my life where I acted to protect others, without even considering the consequences.  My instinctual nature was that strong.

There is something fierce about a painting of a woman holding a club.  The story about the woman featured in this painting is also quite dramatic.  Juana Galan is her name and here is a version of Juana’s story as reported by Wikipedia: “At twenty years old, she was considered the best informed woman of the village, because she worked in a strategic location, the first tavern in the village.  On June 6, 1808, in the battle in Valdepeñas against Napoleon‘s troops, there was a lack of sufficient men to defend the village, so she encouraged women to go out and fight. The other women poured hot water through the windows and boiling hot oil on the road, while Galán was armed with a baton. She took to the street to fight against the French cavalry. Through this battle, the French army abandoned the province of La Mancha and was delayed at the Battle of Bailén, which ended in victory for the Spaniards.”


My friend Susan Apolonio shared this painting and a brief introduction to Juana’s story.  Susan had gone on a little road trip with me and my sister Wendy and during our adventure she also met one of my sister Cosmic Cowgirls, Ti Klingler.  Ti regaled us with the amazing experiences she had been having in courses she is taking with Mama Gena and her School of Womanly Arts.  When Susan sent me this image she shared that there was something in the eyes that reminded her of Ti and that I could pass it along to her.  After forwarding it to Ti, who I might add, works as a church secretary, yet is also adorned with body art and has the sassy Cosmic Cowgirl handle “Sugar Bitch,” responded that she actually keeps a baseball bat behind her desk and calls it the security system.


This story and the image led me to reflect on our identities and how we are more than what meets the eye.  It is both an exciting prospect and yet can also be disconcerting.  In the “disconcerting and disturbing” column you might find the example of the neighbor being interviewed by a camera crew because the house next door was discovered to have harbored a serial killer or a gangster.  The neighbor shakes his or her head in disbelief and stammers, “But he was such a quiet and pleasant man.”  In the “exciting and interesting to discover” column you perhaps learn that a mother that you befriended on your children’s kindergarten trip is also a novelist and that you share many fun interests in common. 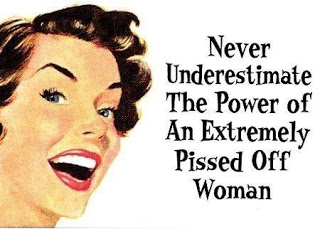 People who know me are shocked to hear my story of how at the age of ten years old I watched as a man walked up to my father at an outdoor wedding and proceeded to punch him in the face with a fistful of quarters.  A brawl broke out and in the midst of seeing my father covered in blood and fighting to defend himself, I then spotted an older brother of mine about to be attacked and have his broken leg kicked by someone.  I  blacked out and went on the attack myself and punched the adult male who was about to injure my brother.  I punched him so hard in the face with my hand that was encased in a very hard cast, (I happened to have a broken hand), that I not only knocked him down, but also broke his nose.  Who knows what might have happened to me if other adults hadn’t some to my defense when the guy got up back up holding his nose, but threatening to harm me.  Later on I had no recollection of my actions and only knew what happened from stories of my fierce defensive reaction.


Later in my teen years my dad confronted two teenagers trying to break into my sister’s car at about 4 am.  The two young men were mouthy but took off.  They returned though in about 10 minutes with a larger group from an all-night party.  My dad, not one to take lip from some teens, went back outside to talk to them.  What he didn’t realize at the time was that some of them were hiding bats and pipes behind their backs.  I looked out the window, took inventory of the situation, and yelled for my mom and sister to call 911 and grabbed our well-trained doberman pinscher and headed out the door to back my father up.  Our fierce dog immediately had an impact.  Most of the teens backed up and made comments about the dog who was snarling and barking at them.  I could also tell they were having second thoughts about their actions when I started commenting that I recognized some of them from my high school.  I really don’t know what would have happened if my dad had remained outside by himself.  He could have been beaten, or worse.  Fortunately, some of the teens were probably already nervous about the situation, and between the threat of the dog and being told the police were on the way they all departed.  About a month later though we learned that the ring leader of the group in front of our house had been arrested for murder. 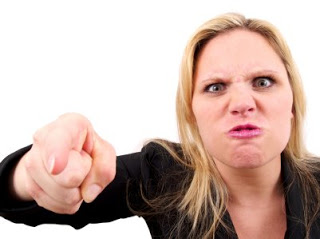 My last tale of fierceness occurred when the abusive ex-boyfriend of a roommate came to our house.  He had actually come into the house and was upstairs.  He became verbally abusive to another roommate and I thought he was going to hit her.  Without thinking I threw my arm in front of the roommate to protect her and closed the gap between the abusive boyfriend and myself, so that I was in his face and poking my finger into his chest.  I was livid and I backed him down the staircase, my finger continuing to hit him in the chest as I told him in a loud and threatening voice to get the fuck out of my house.  I think he was in shock at having a woman be so aggressive with him that he started blabbering about it being his ex-girlfriends house too and that he was there to see her.   I told him that she only rented a room, and that I and my parents owned the house and that he needed to get the fuck off my property right then and there.  As he backed out the front door and down the porch steps and tossed out a few more expletives and yelled that was  never, never return to my house again.  Later on after the adrenaline had worn off, and we had reported the incident to the police, I shivered and considered what could have happened.   In the heat of the moment though my fierce warrior self had risen to the occasion.


There is both darkness and light in all of us humans.  We can be complex creatures and our emotions sometimes get the best of us.  I know from experience that when push comes to shove I too have the ability to be a bad ass.  I prefer the peaceful path and using reason and understanding to deal with situations.  I certainly hope that I am never again put in the position where I have to physically defend myself or a loved one.  Yet I must admit that I stand a little taller knowing I didn’t play the victim role and that when necessary I stood my ground and called upon my inner fierceness.


There are other times, much less dangerous, where I have also felt fierce.  I definitely felt fierce when I went skydiving.  There have been times when playing sports that I have felt tough and strong.  Sometimes I equate my resilience through difficult personal challenges with an inner fierceness too.

I find stories of fierce women to be inspiring.  In college one of the papers I loved researching and writing was about Native American women warriors.  When I heard stories about Cosmic Cowgirl and artist Sue Hoya Sellars and how she rode a motorcycle through the streets of San Franciso decades ago I was incredibly impressed by her fierceness.  How about women like Amelia Earhart who dared to do things no other woman had ever done before?


Consider ways to get in touch with your own inner fierceness.  What might you dare to do that scares you a little, or a lot?


What are some ways your fierceness has expressed itself?


Have you ever had to stand your ground in a difficult situation or confrontation?  How did you handle it?


Come on, tell the truth, are you a bad ass?


What is the most fierce thing you could think of doing right now?