st1\:*{behavior:url(#ieooui) }
Albert Szent-Gyorgyi a Hungarian physiologist who won the Nobel Prize in Physiology – Medicine in 1937 and is credited with discovering vitamin C described water in this way, “Water is life’s mater and matrix, mother and medium. There is no life without water.”
The adult human body is composed of approximately 55 to 60% water–the brain is composed of 70% water, as is skin, blood is 82% water, and the lungs are nearly 90% water.  You can survive about a month without food, but only 5-7 days without water.   And consider this amazing fact, it is possible to drink water today that was here in the dinosaur age.
When I began to learn more about water I also began to realize that water was a source of life.  But for most of my life I never really gave much thought to water.  Being born in the United States in California in a suburban community in 1969 clean water was available whenever I wanted.  As I’ve grown older and learned more about the world I’ve discovered that for some people even having access to clean drinking water is hard to come by.  When I make my gratitude lists, water is always on them, as well as indoor plumbing.  During the summer when I am taking water aerobics classes at the local city swimming pool I always give thanks when I am in the water because I am aware that there are people on the planet who are struggling to get enough water for their most basic needs.
Now while one could get morose about these inequalities, that doesn’t really help improve matters. Here is what can help make a difference.  First is to bring awareness to World Water Day which is on March 22nd  to your family, friends and community. For more information about World Water Day be sure to visit this web site:  http://www.unwater.org/worldwaterday/index.html 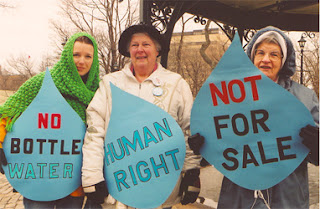 Progress was also made, when in the summer of 2010, the United Nations voted to make access to clean water a recognized human right. This was welcome news to those fighting the disturbing reality that more people die each year from contaminated water than all forms of violence and war combined.
The UN vote is just the beginning.  Now our countries and communities need to make good on the commitment to provide access to clean water to the nearly 1 billion people worldwide who currently rely on bacteria-infested water that causes everything from diarrhea to dysentery.
If you are interested in taking action check out these organizations and see what you can do to help: 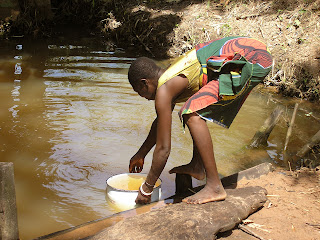 Water for People programs improve drinking water in developing countries: http://www.waterforpeople.org/
Water Advocates promotes water availability, sanitation and hygiene: http://www.wateradvocates.org/
Population Servies International is involved in efforts against waterborne diseases: http://www.psi.org/
Global Water Challenge is a coalition working for access to clean water: http://www.globalwaterchallenge.org/
I’ll leave you with several questions and a wonderful excerpt about water from the book Half Broke Horses: A True-Life Novel by Jeannette Walls.
What is the very first word that comes to mind when you think of water?
What are your thoughts and feelings about water?
Do you feel a special connection with water?
Have you ever found water to be inspiring, frightening, healing?
“Sometimes over supper, when Jim got home after a storm, the kids would describe their escapades in the water and mud, and Jim would recount his vast store of water lore and water history.  Once the world was nothing but water, he explained, and you wouldn’t think to look at us, but human beings were mostly water.  The miraculous thing about water, he said, was that it never came to an end.  All the water on the earth had been here since the beginning of time, it has just moved around from rovers and lakes and oceans to clouds and rain and puddles and then sunk through the soil to underground streams, to springs and wells, where it got drunk by people and animals and went back to rivers and lakes and ocean.
The water you kids were playing in, he said, had probably been to Africa and the North Pole.  Genghis Khan or Saint Peter or even Jesus himself might have drunk it.  Cleopatra might have bathed in it.  Crazy Horse might have watered his pony with it.  Sometimes water was liquid.  Sometimes it was rock hard—ice.  Sometimes it was soft—snow.  Sometimes it was visible, but weightless—clouds.  And sometimes it was completely invisible—vapor—floating up into the sky like the souls of dead people.  There was nothing like water in the world, Jim said.  It made the desert bloom but also turned rich bottomland into swamp.  Without it we’d die, but it could also kill us, and that was why we loved it, even craved it, but also feared it.  Never take water for granted, Jim said.  Always cherish it.  Always beware of it.”