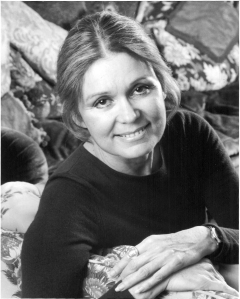 A friend of mine recently heard Gloria Steinem speak in the bay area here in California. I am so grateful that she took the time to share what Gloria spoke of at her uplifting lecture.

“Gloria will be 75 years old this month. She had an abortion at 22 which she never regretted since she never desired motherhood or marriage but did marry at 66 to her best friend who died 3 years later. She said he was the most in the present person she ever met. He would carry dog/cat food in his car and stop to feed animals and throw spare change in a parking lot so children would find it.

She struggled with public speaking and cancelled several engagements and was sued. She is a conflict avoider and wants harmony as key theme in her life. If she could re-do anything, she would do what she knows much faster and do different things to maintain interest and excitement about life. As a writer, she always worked towards deadlines but at her age, she says she’s her deadline. She wrote a recent book: Revolution from Within about finding your own path in life. Whether you are a feminist or not, she is a remarkable woman.”

It was incredibly enlightening to learn the Gloria struggled with public speaking and that she was also a conflict avoider. I wouldn’t have imagined that to be the case. I always saw her as this strong, outspoken, and in some ways fearless woman. For years she has taken on writing and speaking about controversial subjects. She has dared to voice her opinions and views even when it was certain that some people would disagree. It is actually encouraging and inspiring to know that even though public speaking and dealing with conflict was difficult for her that she did it anyway. It reminds me of a favorite quote by Maggie Kuhn which states:

“Speak your mind even if your voice shakes.”

Here were some of Gloria’s key points from her lecture: