The story of Elizabeth Talmer Roberts Shepherd continues….   (The beginning of Lizzie’s story can be located here.)

One humorous story concerning the three little girls happened about this time.  In their Sunday school attendance they had been hearing much about the power of prayer.  The greatest hope of these three little girls was to have a fully equipped playhouse of their very own.  They knew that their folds did not have any way to provide them with such a luxury, so they decided to make it a matter of prayer.  They swept and cleaned a place under a large tree for the playhouse to be placed.  Then they set about to pray.  They prayed and watched, and often got up real early to see if their prayers had been answered during the night.  They even imagined that each cloud might have a playhouse hidden away inside it.  One afternoon the folks went to town for groceries and the girls were left with an older brother.  They wanted until earnest had gone about his work, (or so they thought), then they knelt down around the big wood box in the kitchen and prayed for the playhouse.  They each took a turn praying in a most fervent manner.  When it was Addie’s turn to pray, she brought her fist down on the wood box and said, “And I pray that our playhouse will come down, plunkety, plink, flunkety, plunk.”  Outside, Earnest and his friend, who had been listening to them, were doubled over with laughter.  And of course the story got passed around the family.  Soon the girls decided that a playhouse was not the thing to pray for.  But in later years, they enjoyed telling and retelling this story on themselves.

But Edna did have one of her childhood prayers answered in a very dramatic way, and it always strengthened her to remember it.  One day the family was getting ready to go to town.  The children were not often taken along, but this day they were told they could go.  So everyone hurried around to get ready, but they could not find the baby’s shoe.  After looking everywhere else with no success, Edna decided that it must be in the bed covering so she carefully shook them out but to no avail.  Not knowing where else to look, she crawled in under the quilts and began to pray that she might be able to find the shoe there.  In a few minutes she crawled out to look on the top of the covered, but there was no shoe.  Then she dived right back down under the covers again, and began to pray that much harder.  They next time she came out to look, there was the shoe, as she had prayed that it would be, on the top of the quilts.

Edna had a firm testimony that prayers could be answered.  One summer day about this time the girls were amusing themselves at a game.  Lacking toys for fun, they had turned a wash tub upside down in the yard.  They would take turns crawling under it while the other two beat a good drum rhythm on the top of the tub.  The noise soon became very annoying to their father and he shouted for them to stop the banging, but they were having such sun, they paid little attention.  Valie was under the tub and Edna and Addie were beating good strong strokes, when their enraged father came around the corner carrying his pitchfork.  The girls were fearful of their father’s temper.  Valie stayed right where she was under the tub, Edna ran as fast as she could and hid between the house and the cellar.  Addie took another route and sneaked through a hollow log and into the house where she stayed under the bed until her mother got back home.

Another day soon after this, Addie and Valie decided that they would run away from home.  They had crossed their own fields and gone through the fence down on Corn’s place and were hiding in the sagebrush.  When they saw their mother running towards them with Bart under her arm, Valie said, “Oh, we better run. If she catches us she will give us a good whipping.”  But Addie felt differently, “No,” she said “We had better go back, something is wrong.” And something was wrong.  Lizzie had been scrubbing the floor with lye water.  She had set the can and measuring spoon on the table and Bart who was just beginning to crawl had gotten into it.  Lizzie quickly washed out his mouth again and again. Although the lye had burned his lips and the inside of his mouth quite badly, he was not seriously harmed.

Valie can remember going to visit her sister’s family one summer day.  Florence had taken a large empty wooden box and spread a quilt onto it for a playpen for baby Burton.  As Valie bent over to say hello to the baby, she saw there was a large snake in the box with him.  They quickly scooped the baby out and were relieved that it was only an old blow snake.

The family of Florence and Burton Prettyman also continued to grow.  The following children were born to them in the next few years:  February 11, 1902 ~ Forest Mansford Prettyman Burlington, December 27, 1903 ~ Sarah Talmer Prettyman, April 13, 1905 ~ Leonard Murrel Prettyman.

Crops continued to be good on the ranch.  After the spring planting was done, Earnest and the other boys would take jobs hauling freight to bring in extra money.  They hauled the first telegraph wires, cross arms and insulators from Cody down to Thermopolis, Wyoming.  Claude went along with earnest on this job.  In the Spring of 1903, Earnest hauled freight quite frequently to Thermopolis and began to save most of the money he was making.  For Earnest had decided to get married and he needed the money for a wedding stake.  One June 8, 1903 Earnest Wiggett married Mary Golda Kinnamin, daughter of James Aaron Kinnamin and Eliza York.

Earnest was twenty-two that year and Mary had just turned fifteen, having been born June 3, 1888.  They rented a small place further north of Burlington and went there to live.  Valie can remember a small tin trunk that Mary kept clothes folded in.  They had no closet, but Mary always kept her house very neat and clean. 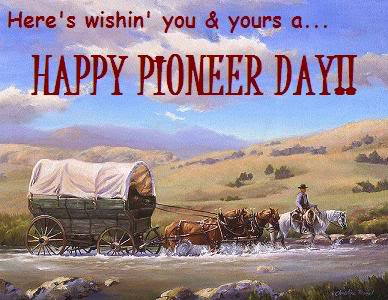 One of the highlights of the year for all the populations of the Burlington Ward was the 24th of July Celebration.  (Pioneer Day is an official holiday celebrated on July 24 in the state of Utah, with some celebrations in regions of surrounding states originally settled by Mormon pioneers.)  The youngsters looked forward to this for weeks.  It was a full day of fun.  There were horse races, foot races and for the boy, sack races and three legged races.  They had a ball game going all day and other games for everyone to enjoy.  A long table was set up under the shade of the bowery and the lunches the ladies had brought were put all together on this big table at noon.  There was fried chicken, potato salad, corn on the cob, slices of tomato, and the ward furnished a large barrel of lemonade, which was a treat for the young children.  There there were all kinds of cakes and pie for dessert.  It was a great day of good food and good fun for all.  Later in the afternoon when everyone was resting from the games, Claude and Eugene Praetor began to fist fight.  As Eugene was to remember years later, “Not because we were mad, we were the best of friends, but just to entertain the group.”  Valie remembers that one of the ladies looked up at the boys and said, “Who is fighting?”  Mrs. Praetor replied, “Oh, it’s my Gene and that Shepherd kid.”